Coca-Cola can without a label asks Muslims to fight prejudice on Ramadan. #TheGoodStuff

Cans of Coca-Cola will go conspicuously unmarked in the Middle East this month as part of a Ramadan-themed ad campaign aimed at drawing attention to worldwide prejudice.

The soda giant has scrapped the iconic cursive letters from select batches of its products, leaving only the white ribbon underline and a message: “Labels are for cans not for people.”

To go along with the minimalist new design, the Atlanta-based company released a commercial in which a group of diverse-looking men try to guess one another’s appearance in a dark room only to find they are way off-base when the lights are flipped on.

The company was able to skirt any nutrition and ingredient labelling rules by setting the label-less cans aside only to be distributed at events, and a case could be made that the bare-bones new look inadvertently equates Coke’s own insignia with worldwide intolerance. But we get the point, and the wordplay is clever. 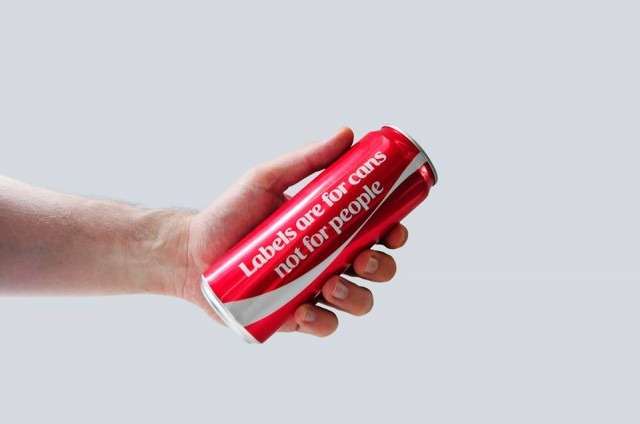 The promotion, entitled “Remove labels this Ramadan,” fits into Coke’s larger “Let’s take an extra second” campaign, which calls on people the world over to take some extra time to get to know one another beyond a first impression — preferably over a sugary beverage.

“In the Middle East, a region with over 200 nationalities and a larger number of labels dividing people, these Coca-Cola cans send a powerful and timeless message that a world without labels is a world without differences,” the agency behind the campaign, McCann-owned FP7/DXB in Dubai, said in a statement. (Memac Ogilvy was also brought on to co-produce the video.)

As one of the most recognizable brands in the world, Coke’s logo tweaking can make a big splash. Its ongoing “Share a Coke” campaign, in which it stamps bottles and cans with personalized names and descriptives typed out in its signature lettering, is credited with a slump-busting bump in sales.